Asbestos in the home

Often the mere mentioning of the word asbestos sends people into a state of panic which in many cases is not justified. We believe this state of panic is often compounded when members of the public, buyers, vendors and even tenants have been subjected to what can only be described as ‘scare tactics’ either through misguided media coverage or by third parties wishing to gain from these misconceptions.

The up-shot of this is that it’s quite likely that a number of people have had their textured ceilings and /or other materials removed at considerable expense where there was no requirement.

The aim of this document is to provide sensible information to home owners, real estate agents, buyers, purchasers and other interested parties (solicitors etc.), so that informed decisions can be made in regards to asbestos.

Based on our years of experience in this area along with analyzing more than 20,000 samples from both the domestic and commercial zones we have found there to be three main product groups of concern in the housing market.

Each will be treated separately below.

The term textured ceiling refers to the "porridge" like material that was a popular alternative to Gib stopping in the 60’s, 70’s, and 80’s. The product is also known by its popular trade names “Glamatex” or “Whisper”. Textured ceilings certainly represent the most common sample we are presented for analysis.

Appearance ranges from white to cream, many of which have glitter or metal flakes added. All types applied prior to the mid 1980’s may contain asbestos regardless of appearance. Chrysotile (white) asbestos was added to the product as a binder, although not exclusively.

Textured ceilings generally represent a low level of risk when compared with other forms of asbestos, although the public perception does not always reflect this.

They in fact only contain a relatively small percentage of what is the least “problematic” of the three main asbestos types. In general the original applicators of this material incorporated somewhere between 1 - 5% Chrysotile if this material was included.

Misconception 2: The house I’m living in has a textured ceiling which may contain asbestos, it has to be removed

US - EPA ‘Removal is often not a building owner’s best course of action to reduce asbestos exposure. In fact, an improper removal can create a dangerous situation where none previously existed.’

a) If the material is still sound and the likelihood of asbestos fibre being released is low, then there is no legal requirement for its removal!

b) If however the material is ‘flaking’, (small deposits continually being found on the floor or furniture), then the risk off Asbestos Fibre going airborne increases as subsequent foot traffic or direct manipulation of the material by children or others is likely to occur. Under these circumstances we believe it to be an appropriate time for the material to be at least stabilised (sprayed with PVA/paint), or preferably removed.

While many people do concern themselves about the potential health risks regarding textured ceilings there are just as many who no longer appreciate this coating and wish it removed for aesthetic reasons or are looking forward to renovating the areas concerned.

For both of these scenarios the material will need to be analysed initially to determine if the material contains asbestos.

If the material is found to be positive and the householder opts for removal, we highly recommend the use of an experienced professional to perform this function. Should the householder insist on removing this himself then we recommend that he/she first obtains a copy of ‘Removing Asbestos from the Home’ a document produced by the Department of Health (Ministry of Health, Code 7022), which outlines this procedure in detail .

Asbestos cement is a form of “non-friable” asbestos, meaning the fibres are within the matrix of the material and are not readily released unless disturbed. By disturbed we principally mean broken, sawn, drilled, sanded or water blasted, all of which are banned actions under the current ‘Guidelines for the Management and Removal of Asbestos’ administered by the Department of Labour (OSH).

By far the most common form of asbestos in New Zealand is asbestos cement. Two major companies produced the product for many decades, with well publicised health consequences to many of those involved in the manufacturing process.

By far the most common form of asbestos in New Zealand homes is asbestos cement.

In the domestic situation, houses built prior to the early 1980’s are likely to have asbestos cement in some form somewhere. Fibrolite eaves, gables, cladding and sheds are very common, as are Super 6 roofs and fences. Indeed the Group Housing divisions (i.e. Neil Housing & Universal Homes) that sprang up throughout the country over this period were often clad exclusively with Asbestos containing materials.

As previously mentioned the hazard associated with this sort of material mainly relates to inadvertent disturbance. However keeping asbestos cement in a good serviceable condition, lichen free and painted (referred to in the industry as encapsulation), not only minimises passive asbestos fibre release it also extends the useful life of the product.

When purchasing or planning renovations, consideration of asbestos cement products is vital due to the potential hazard as well as additional costs of removal and disposal. 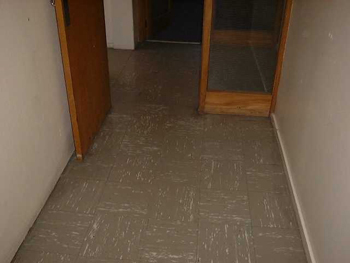 When investigating possible sources of asbestos in the home, vinyl floors are often overlooked. It is in fact extremely common for houses to have such products utilised as existing floor coverings, or underneath newer replacement vinyl.

Unlike textured ceilings and fibre cement that were phased out in the early eighties, asbestos backed vinyl’s were imported into the country well into the late 80’s, and possibly into the 90’s. The typical mottled, tile patterned, geometric styled, or false wood grained vinyl’s that are so much of 70’s and 80’s décor in particular are often backed with white asbestos.

It is important to stress the fact that if left alone the risk associated with these products is virtually nil. However the act of pulling up these vinyl’s, and in particular sanding the associated backing material down to expose floorboards beneath is an entirely different proposition.

This can liberate high airborne asbestos concentrations. Most commercial floor sanders are aware of this hazard and may refuse to sand such products. Some who have attempted to sand residual asbestos backing have felt the wrath of OSH via the courts!

1) Determine age of building and/or material

For vinyl based floor coverings if material is less than 10 years old (1992) then it is most unlikely that the material contains asbestos. All other will require testing.

2) If testing is required then approx 20 to 30 grams of texture or approx. 2 inch square piece of fibrocement / vinyl flooring (inclusive of backing) to be placed in a sealable plastic bag.

3) Samples should be forwarded to:

I hope we have made the point that asbestos can, although not necessarily, represent a hazard to ones health and/or to the health of ones account balance! We feel it is very unlikely a house holder will be forced to remove all asbestos products from the home via legislation, although due to much misinformation about the subject, the prospect of a hasty, unwarranted removal prior to those dream alterations or as a result of ensuring a sale is far more real.